I finally had some time to play with latest Eclipse version, named Ganymede, and the recent version of Maven2Integration, plugin for Maven Here are some impressions about it

Installation, by the way didn't go as smoothly as I expected. I pointed to the M2Integration update site, but Eclipse plugin dependency management is still messy. I got warnings I couldn't install M2Integration: part was related to integration with Subversion (which is an optional package, but I wanted it), So I had to install Subclipse plugin, pointing to the Subclipse update site, even if Ganymede isn't yet mentioned on the supported versions… the risk was worth taking :-)

I still had a couple of issues open: some packages related to zest couldn't be found (strangely this happened only on my Windows machine, on Mac OSX this didn't happen, but I guess it's unrelated to the OS). Those are part of a graphical library needed to draw fancy dependency graphs, so I had to to go to the GEF Update site to install them as well.

The last missing piece was support for AJDT. Well I won't probably need AJDT right now, but I preferred to have a complete installation, instead of remembering that I left some pieces behind. So included also the Ganymede compatible AJDT update site to my list. Then I was ready to install and run the m2Integration plugin.

Looks like maven support within Eclipse got to an interesting stage. The plugin now assists throughout the whole POM management, and is pretty well organized. The plugin just interacts with Eclipse nicely, as the default build engine. There are still a couple of places where it might be more helpful: I typed a space in the artifact ID (my mistake, but the plugin should also help Maven newcomers…) and I had a nullPointerException. And while selecting the archetype, the choice was huge without contextual information. So it looked somewhat scary. Anyway the overall impression is pretty good: its definitely a useful tool if you're using maven within eclipse; and I really liked the dependency graph:

Here is a screenshot. 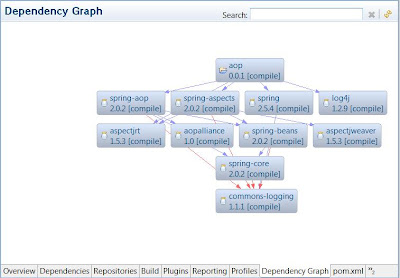